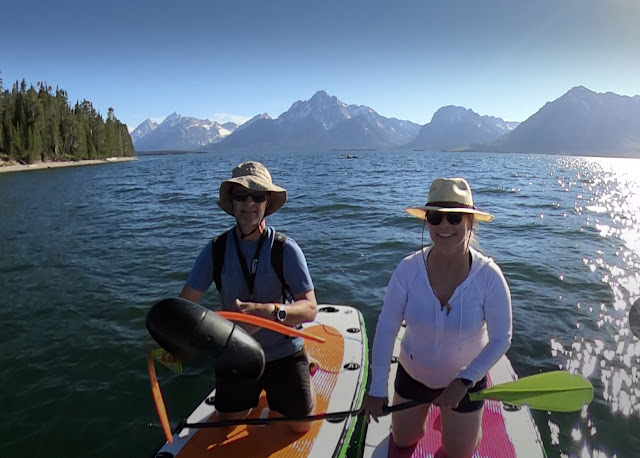 Given the chop on Jackson Lake yesterday, Kara wasn’t excited about paddling four miles, with a portage between the lakes. So I went early while Kara slept in. It was still early enough that there was ample parking at String Lake (an hour later and the parking would be impossible) and the water was glass, no wind, no chop. I paddled a mile to the north end of String Lake then did the portage over to Leigh Lake. The portage was much easier than I was told, only 300 yards through the forest on a wide, flat trail to Leigh Lake, and it was well worth it. Leigh Lake is big and there were only two other paddlers in sight. Leigh Lake can only be accessed by human power, so the effort to get there weeds out the 'riff-raff.’ The crowds stay on String Lake, most are unwilling to portage over to Leigh. The water on Leigh was smooth and calm, not even a hint of a breeze, and I paddled about a mile and half over to the point where Mt. Moran comes into full view. Far across I could see the scree slope that runs into the lake and where the CMC climbing route starts up Mt. Moran (CMC is the name of route, named for the first group to climb the route, the Colorado Mountain Club).

I climbed Mt. Moran about then years ago and it was a fantastic day of climbing. Although, the approach we chose was horrendous . . . and stupid. We didn’t rent a canoe to paddle to the base, instead we bush-whacked around the east and north sides of Leigh Lake. By the time we reached the trail at the base of Moran we were scratched, bloody, and already exhausted before even starting the 3,000 foot vertical climb up to the CMC camp. Paddling today reinforced how stupid it was to bush-whack around the lake. We camped at the CMC camp then, next morning, went up Drizzlepuss (rock tower mid-way up the CMC) then climbed the CMC  just left (south) of the black dike that runs vertically up the face of Mt. Moran. While climbing the face of Moran, which is much like the West Slabs on SLC’s Mt. Olympus, only steeper and better rock, you are directly above the Falling Ice Glacier. While climbing we could hear it popping and groaning. I loved hearing that glacier, so unreal com ing from the hot, glacier free Wasatch Mountains.

I aimed to paddle to the base of the CMC, but I still had over half the lake to paddle, and I kept thinking "Kara would love this,” so I turned around to go persuade to come paddle. When I reached the truck and loading my SUP, there was a battle for my parking space, there was a long line-up of cars waiting for parking. Grand Teton National Park is really crowded along the roads and trailheads, but if one is willing to hike or paddle just a short distance, the crowds disappear. I drove back to Colter Bay to get Kara. I told her how much better is was than yesterday at Jackson Lake and she was game. When got back to String Lake (about noon) the parking lot was packed and we got in the queue. We were willing to wait, but if nothing opened in 20 minutes we were ditching the SUPs and going cycling.  We only sat there about ten minutes until someone left, luckily we were in place to snatch it. Once on the water Kara loved it!Smooth glassy water, so nice given the windy chop we had on Jackson Lake.  Although, while in the middle of Leigh Lake there was a weird micro-burst of wind, presumably from a thunderhead off to the west, and it almost blew us off our boards. For a few minutes there were big waves and a hurricane wind, then, as quickly as it came the wind and waves disappeared. Leigh was again dead flat and glassy. We rarely wear our life-jackets, we strap them to the boards for emergency use only, but this micro-burst was an eye-opener. If we had been blown off the boards it would have been impossibly to get the life jackets on given the panic of dropping into an icy lake. We agreed, next time we’re on open water we will wear the life-jackets.

Solo paddling on String and Leigh Lakes was beautiful, but it would’ve been better with Kara,  . . .

South end of String Lake with the Grand Teton peaking out. the high peaks left to right: Teewinot (peeking around the right side of my hat), Grand Teton, Mt. Owen (barely seen), Storm Point, Mt. St. John and Rockchuck Peak.

Cycling the Teton Bike Path, Saturday June 19, 2021
The big problem with the Tetons is I can’t stop taking photos. . .
After paddling, when the light was softening and the crowds gone, we drove to Jenny Lake and parked. If we had tried this an hour earlier parking would have been impossible. If you know Jenny Lake you know it is popular. During the day even the highway near the turn-off to Jenny Lake is lined with cars a half mile in both directions. At 6:00PM the parking lot is wide open. From Jenny Lake we rode the bike path to about two miles south of the Taggart Lake trailhead (11.5 miles total). Not a huge ride but big miles was not the point, riding at the foot of the Tetons at dusk is undescrabale. On the way back we rode into the Lupine Meadows parking lot, the trailhead for Garnett Canyon which is the access trail to the heart of Teton climbing, including the Grand Teton (O/S, Upper Exam, North Face, Black Ice Couloir (via a traverse of the Enclosure)), Mt. Owen, Middle Teton, South Teton, Ice Cream Cone, South Teton, Cloudveil Dome, Nez Perce, etc, etc. Parking there is tough too. Lupine Meadows parking is now even used by Jenny Lake desperados, they park then walk to Jenny Lake, about a mile north. 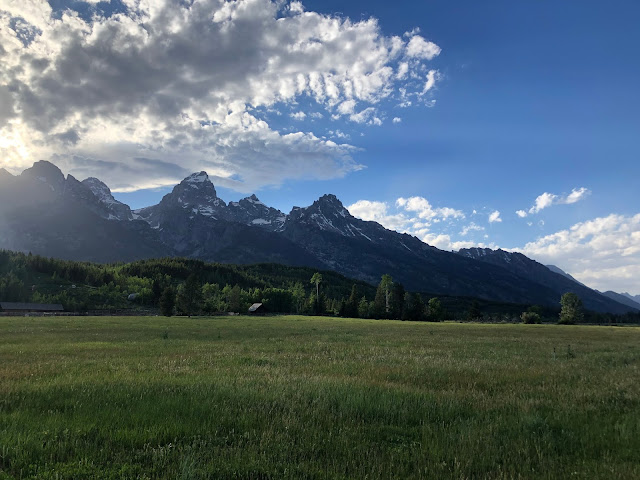 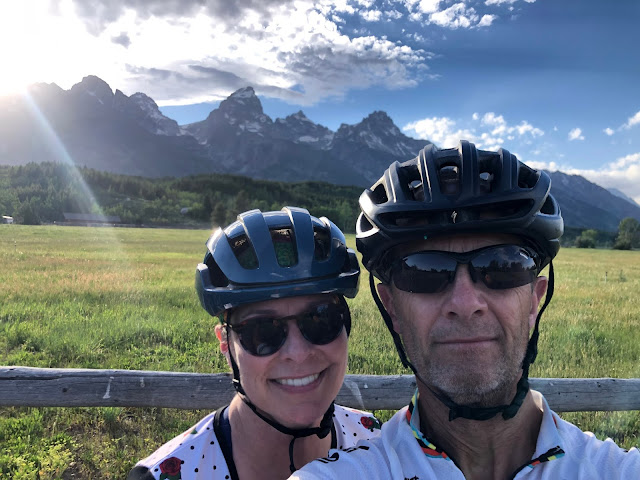 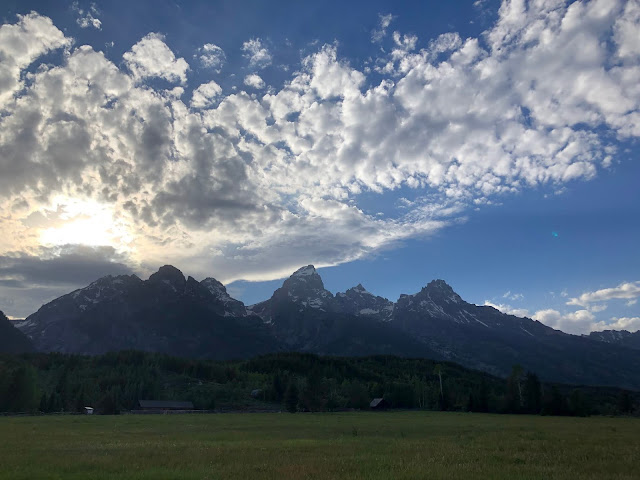 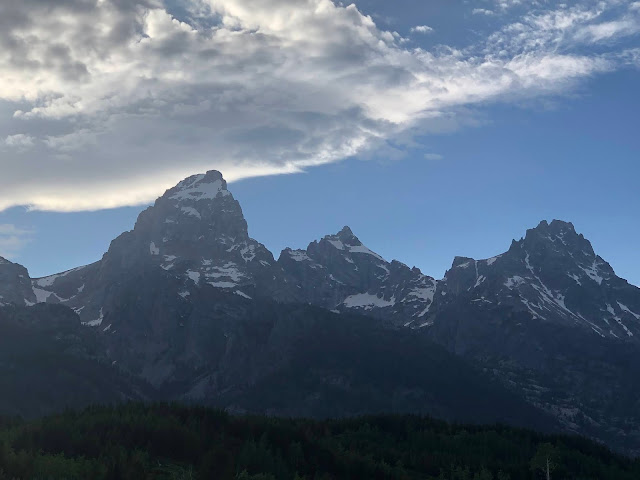 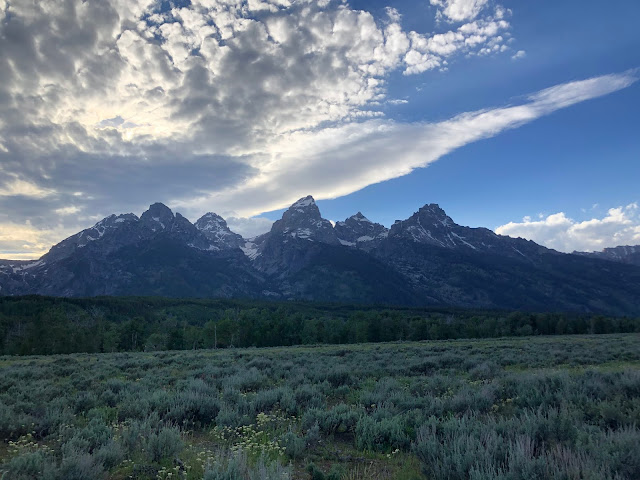 Random shots (too many) from GTNP 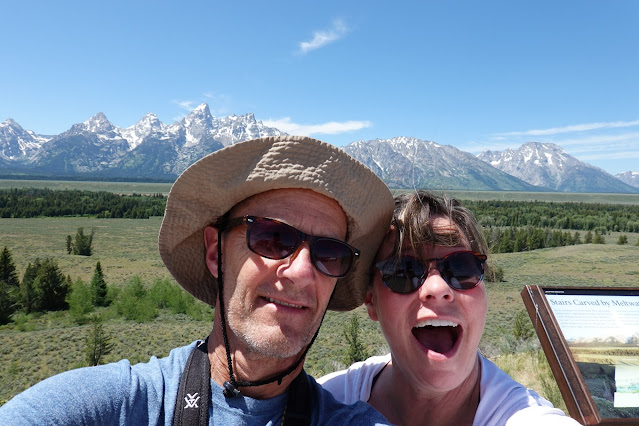 Memorial Day and there were only three trucks at the Mustang Ridge boat ramp . . . . and no wake-boarders. I had not gone to Flaming Gorge in decades and was shocked by how nice it was. Clean, clear, flat water, surprising because the reservoirs along the Wasatch Front are murky and cloudy, and choppy as hell from all the wake boats. The five hour drive and a manky hotel room in Vernal were worth the great SUPing. We’ll be back, but camping next time at the Red Canyon Campground, it was only half-full and covered in big Ponderosa Pines. 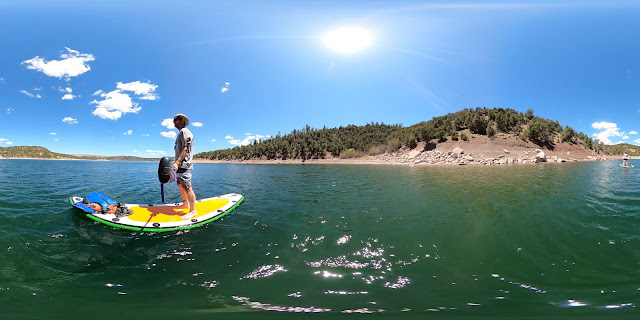 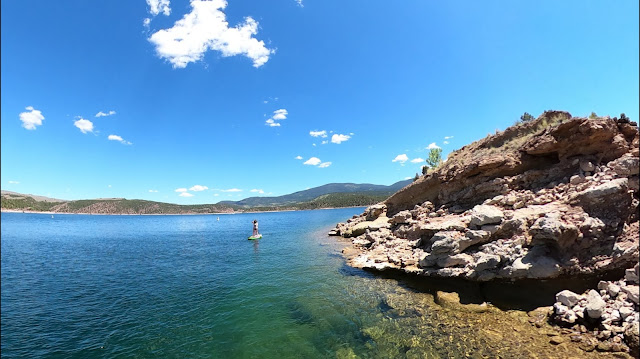 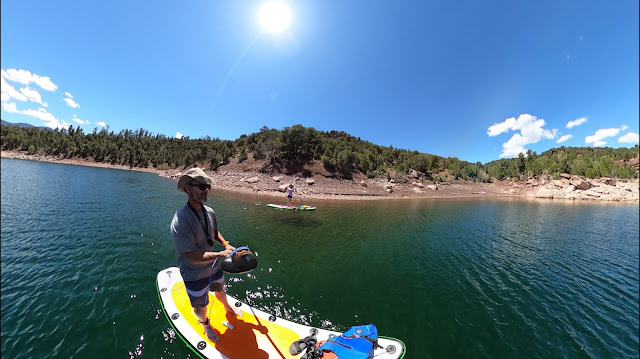 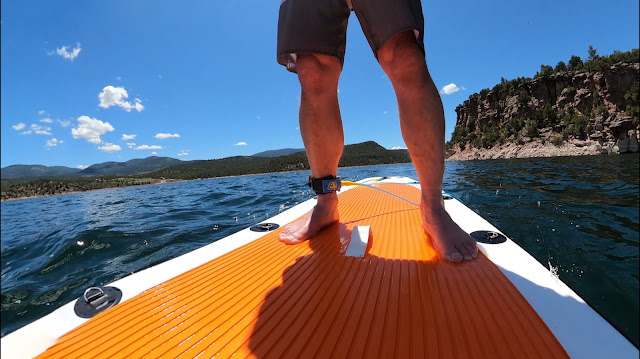 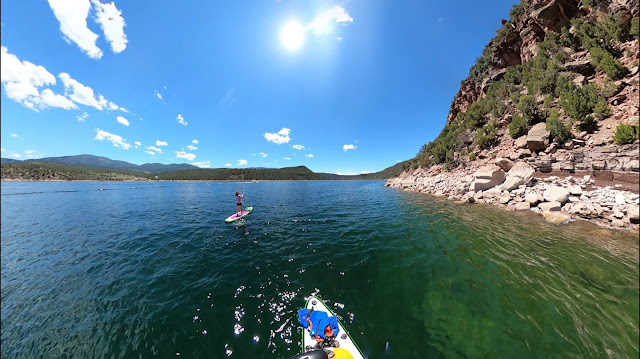 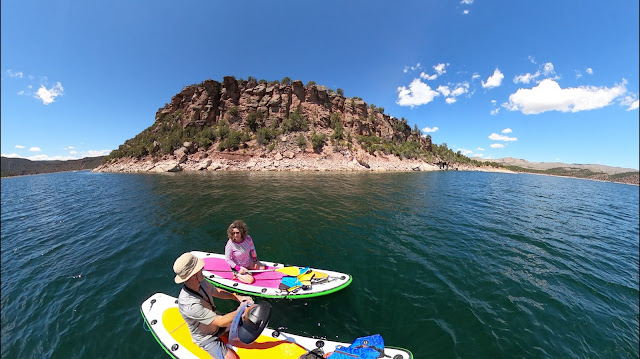 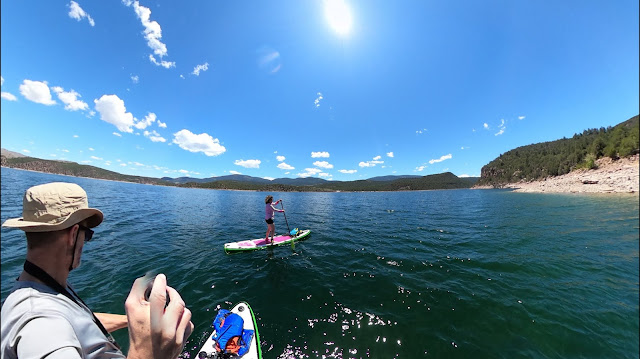 The Swett Ranch is a homestead above (south-east) of Red Canyon of Flaming Gorge, and it is listed on the National Register of Historic Places. We rode the dirt, double-track that circles the ranch, riding clockwise. Three-fourths the way around the loop, about mile five (of eight total), we took the detour to the Swett Ranch, which located in the middle of the loop. We spent more time touring the ranch than we did pedalling, which was a good choice, it was inspiring to see the beautiful ranch that was carved out of wilderness beginning in 1909. When Oscar Swett was sixteen and too young to homestead, he persuaded his Mom to buy the original 151 acres. When he reached legal age (21 years ?) he bought the 151 acres from his Mom.

Oscar and his wife, Emma, acquired more land, totaling 397 acres after 58 years. Over those 58 years they raised nine kids, built two more homes when they needed space for their growing family, and raised/sold beef-cattle for income. They lived off deer and elk, never beef, they didn’t want to eat their livelihood. Deer and elk were free other than the effort to hunt. The ranch is located on the east end of the Uintah Mountains at about 7,000 feet elevation. I loved walking through the homes and out buildings, I could feel the energy of the family that created a life here. They lived during the same era as my grandparents and, seeing their work, the gap between two completely different worlds was bridged. All my respect! I’m convinced their era was much healthier physically, mentally and emotionally than today's tech-obsessed world.

Our ride was just over 8 miles, including a half-mile starting and aborting a ride of the Red Canyon Rim trail. We started the Rim Trail but it was a crowded, rocky, narrow single-track, and, after getting crusty looks from hikers with way too-many unleashed dogs, we quickly decided the Rim Trail would have wait for another day. Both the Rim Trail and Swett Ranch trails start at the same scenic overlook, about two miles south of the turn-off to the Red Canyon Visitor Center on Highway 44. The Swett Ranch road is a smooth, gravel double-track with very few riders, perhaps because it’s considered ‘easy.’  I’m OK with easy-non-technical riding, crowds not so much. We saw only two other cyclists on the loop and NO unleashed dogs. I’ll always take zero dogs over a technical trail. I’m not a dog hater, I just don’t like an uninvited wet nose shoved into my junk. The loop is beautiful, mostly rolling, open sage meadows, but there are also forests of big Ponderosa Pine. The scent of pine throughout the ride was wonderful. 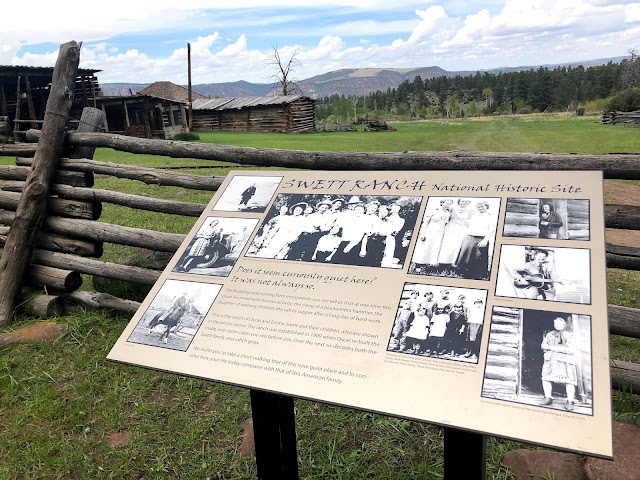 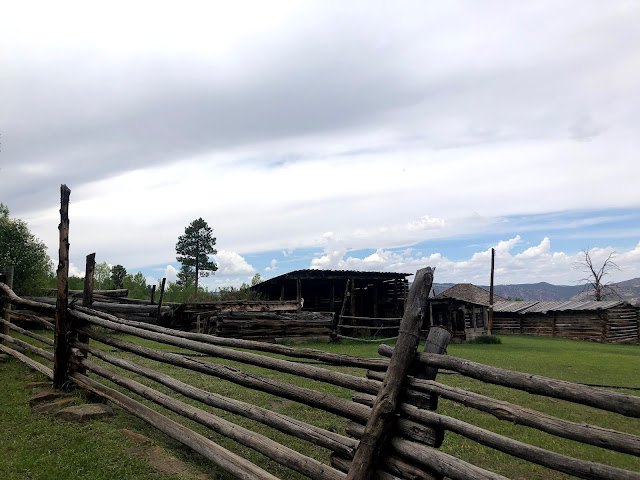 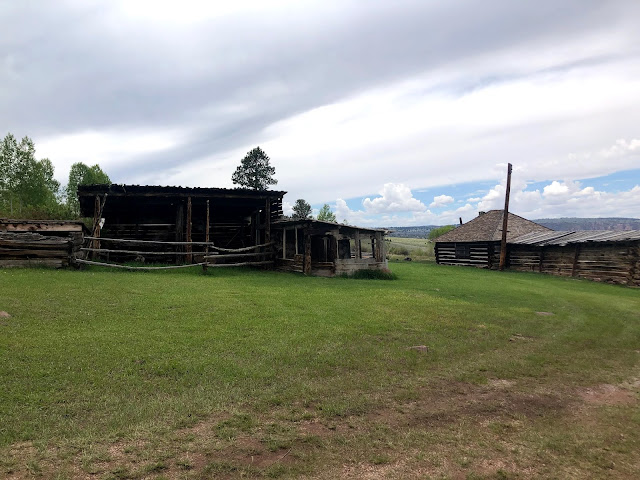 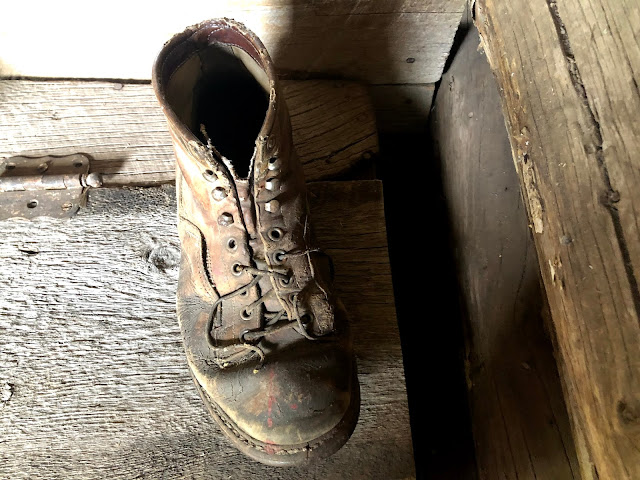 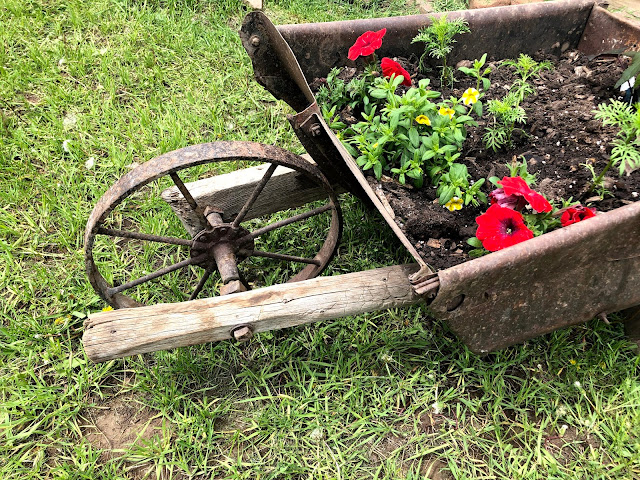 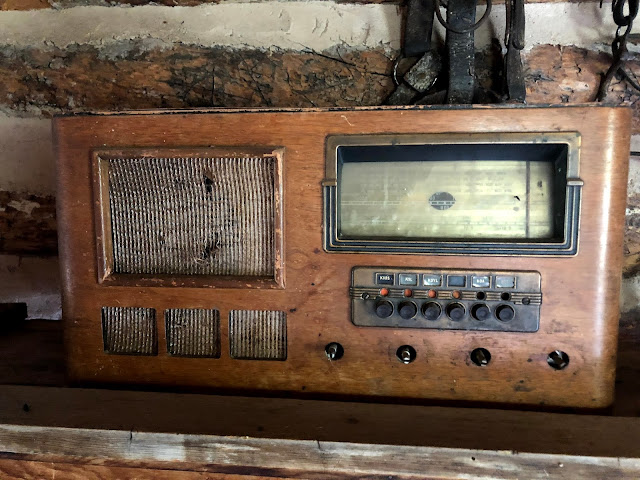 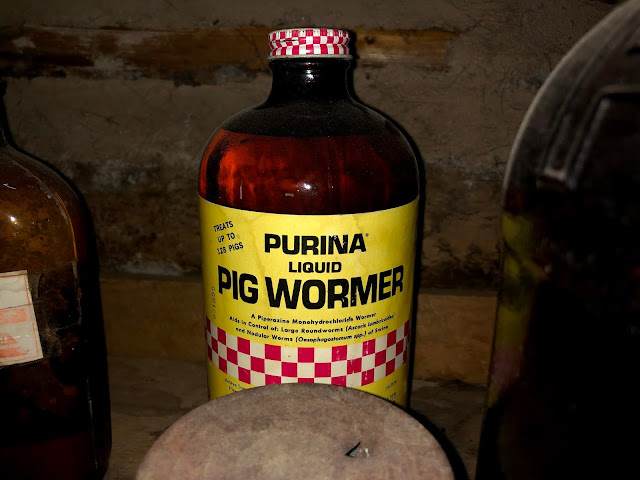 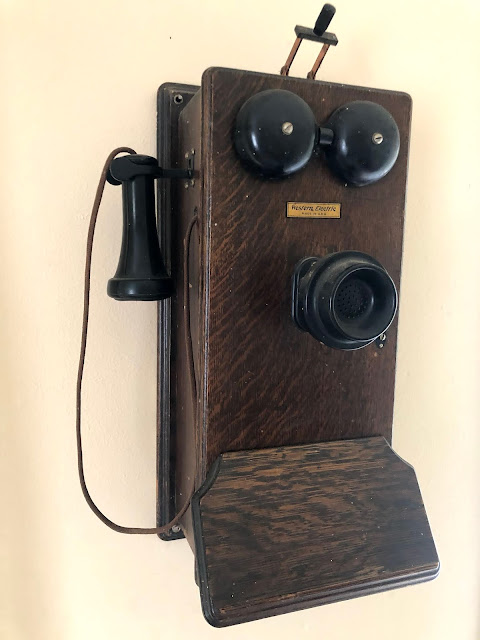 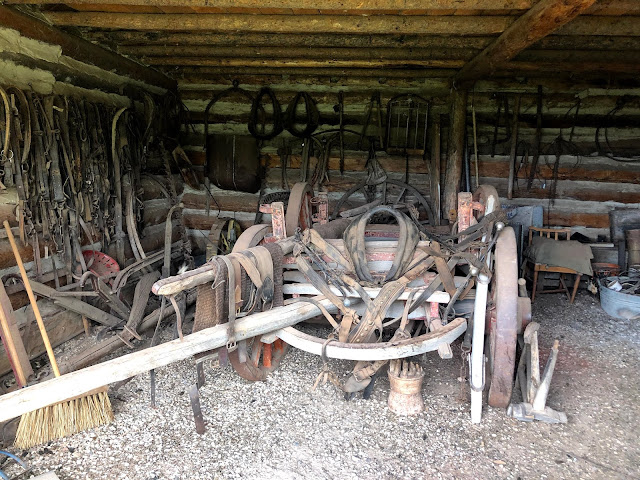